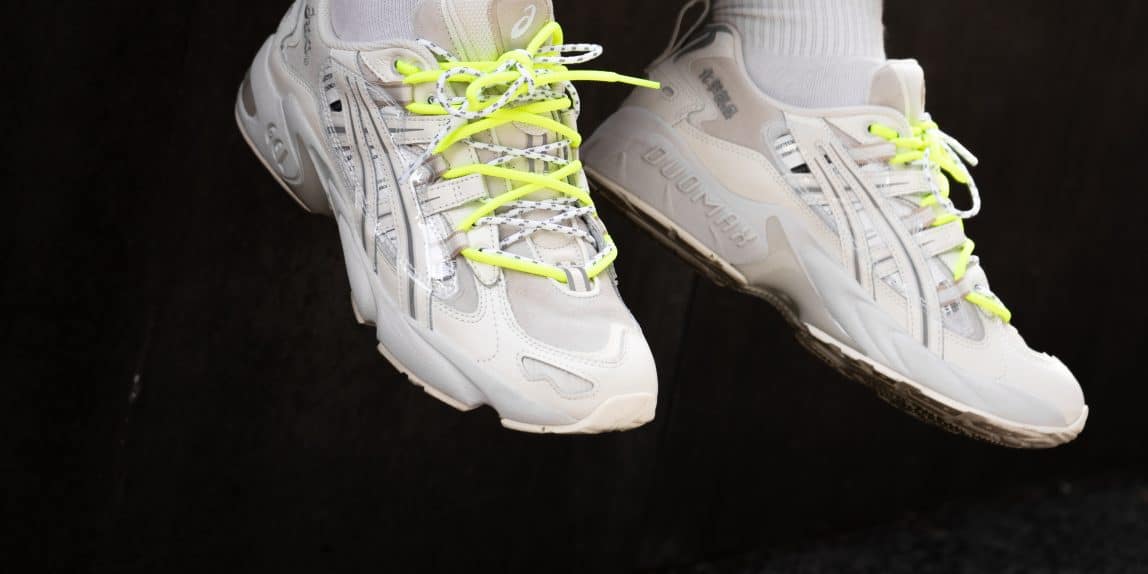 How Asics (again) reached the top

Chemist Creations – this is not a chemistry construction kit for primary school pupils, but the American brand that recently collaborated with the sporting goods manufacturer ASICS and helped itself and it to even more success.

“We are Chemists. Chemists mix different substances to create new matters, that’s exactly what we do.”

Ethene is a gaseous, colourless, flammable, sweet-smelling organic compound with the sum formula C₂H₄. It is the simplest alkene and an unsaturated hydrocarbon with a carbon-carbon double bond.
What does chemistry have to do with shoes now?
Quite simply. Chemist Creations is the diffusion label of the brand C₂H₄ – which stands for the element ethene.
C₂H₄ created Chemist Creations to expand its creative radius and explore the haptics of different shapes and materials in its collections in order to illuminate the brand’s modern culture and philosophy.
Raised in Shanghai, designer Yixi Chen came to Los Angeles at the age of 17 to graduate from the University of Southern California with a degree in Theatre and Film.
A short time later, she dropped out of her studies to devote herself to her passion, fashion design.
Since Cheng always lacked something in her clothes, she decided in 2014 to found the label C₂H₄ to satisfy her fashion needs.
The concept she pursued with C₂H₄ was simple chemistry: creating new matter from existing elements.
Cheng draws her inspiration from films of the 80s and 90s. To be precise, from the films of the futuristic “cyberpunk” genre, in which fashion was constantly reinterpreted.
This futuristic is present in all of Yixi Cheng’s works – from C₂H₄ to Chemist Creations: from the first collection, through collaboration with the sports goods manufacturer Kappa, to the latest collection. Even brand communication radiates futuristic and chemical flair. The Chemist Creations website, for example, is designed like a nude in which one could discover new insights into various chemical substances.

A healthy mind in a healthy body – that is the motto of the Japanese brand ASICS.
ASICS was founded in 1949 by Kihachiro Onitsuka under the name Onitsuka Co. Ltd. and initially focused on the manufacture of basketball shoes in Onitsuka’s home town of Kobe, Japan.
Why exactly basketball shoes? Onitsuka believed that Japanese youth in the post-war period had to struggle with low self-confidence and depression. In his opinion, sport would have been the best solution and so he started to produce basketball shoes for the school children in Kobe.
For Onitsuka, the biggest challenge was that basketball shoes were considered to be the most difficult shoes to make, so he believed that if he jumped that hurdle, he could do it with different silhouettes.
The first of these basketball shoes was released in the spring of 1950 and featured the face of a tiger on the upper of the shoe – hence the later name “Onitsuka Tiger”.
During dinner, Onitsuka looked at the suction cups of squid tentacles and came up with the idea of restructuring the sole of the shoe to resemble the suction cups of the squid to improve grip on the basketball court.
However, the shoes had too much grip and some players were injured. This fortunately resulted in some improvements to the shoe and Onitsuka’s first major breakthrough in the world of sports footwear.

During the 1950’s and 1960’s Onitsuka produced various shoes for various sports such as wrestling, marathon running and golf.
This diversified production had a strong impact on athletes’ perception of the brand. After being renamed “Onitsuka Tiger”, it finally became known and enjoyed worldwide success – at the latest when the winner of the Boston Marathon ran in the brand’s shoes and the Japanese women’s volleyball team won the Tokyo Summer Olympics in 1964.
But Nike’s co-founder Bill Bowerman also contributed to the success – which you might already know when you read the blog post about the Nike Zoom Vomero 5SP.
Phil Knight and Bill Bowerman also sold running shoes from Onitsuka Co. in their sports shop “Blue Ribbon Sports”, especially the Onitsuka Tiger Cortez – now called “Corsair” – on which Bowermans Nike Cortez is based. So Nike is responsible that Onitsuka Tiger made it to the American shelves.
After the partnership with BRS/Nike was over in 1971, Onitsuka Tiger took another big step towards becoming a global player in 1977.
On July 21, 1977, Onitsuka Co. Ltd., GTO Co. and Jelenk Co. signed an agreement for cooperation and equal management of ASICS Corporation.
Since all three companies came from the sporting goods industry, they felt it made sense to merge into a single large sporting goods manufacturer and thus survive in the Japanese economy.
When the logo, designed by the “God of Typography” Herb Lubalin, and the name were fixed, ASICS stormed the market and won numerous competitions and awards with the help of many renowned athletes.
Despite the brand’s success, ASICS was not yet as well known among non-athletes. This changed in 1986 with the launch of the Asics FREAKSα in Japan. From 1987, people on the European and North American continents also got a taste of the new αGEL sole, namely with the release of the ASICS GT-II.
In the same year ASICS launched the first ASICS Gel-Lyte and created a legendary success story.

Of hybrids and beetles

But back to ASICS Gel Kayano, which was created by shoe designer Toshikazu Kayano.
In early 1993, Kanayo received a special order to design a hybrid for the new cross-training movement – without rules and without a predetermined selling price.
For Kayano, who had previously designed shoes for all kinds of sports, no problem – one would think.
After initial difficulties at the beginning, which were due to the idea, he was finally inspired by a small part of nature – the well armoured stag beetle, which also feels at home in our woods.
This is how the nested and multi-layered upper of the Asics Gel Kayano was created, which protects it against bad weather and people stepping on it.
In addition to many new technologies, there was for the first time a sock-like entrance (the Mono-Sock System), which was supported by the ASICS logo as a plastic cage and gave the runner support.
Runners who slipped into the Kayano gel for the first time were immediately blown away by the shoe and orders began to maximize.
The Gel-Kayano series was born.
In 1999, the fifth iteration of the cult runner came onto the market – the ASICS Gel Kayano 5.
After Kayano had returned from the USA, he had to create the fifth version of the running shoe under immense time pressure. So he went straight on to make sketches. Meanwhile, a detail caught his eye that reminded him of the human stomach.
For the next sketches he now had the human body and its internal organs as inspiration and you can see what came out of it. A technical, beautiful running shoe with a lot of details, curves and the certain vibe.
At the time when the Gel Kayano 5 came onto the market, people were crazy about visible technology and so the shoe was given visible gel pads at the heel – and that in a world where “Air” was the non-plus-ultra in terms of visible technology.
Although the Gel Kayano and the Gel Kayano 5 no longer have much in common, they are the only ones in the range that have been relaunched and are still to be found on the road today – alongside the latest versions, of course, which are, as they were then, technical running shoes.

For me the Chemist Creations x ASICS Gel Kayano 5 OG is the shoe of the year 2019. No Sacai x Nike Waffle Trainer and also no Travis Scott x Nike Air Jordan 1 can reach this shoe for me. And I really wouldn’t have thought that I could say something like that about a shoe from ASICS. Chapeau!
Chemist Creations and ASICS did everything right! The shoe came at exactly the right time, and for me also in the right colours.
After ASICS had already presented several collaborations this year, such as the one with the German brand “GmbH” and “Hypebeast” on the Gel Kayano 5, it was already clear that something strong was coming at the end of the year.
The shoe was kept entirely in eggshell white with grey accents.
The mudguard and the heel are made of high quality smooth leather, while the Toebox is made of soft suede.
The highlight of the shoe, however, is the side section. Here, inscribed “slips of paper” were placed under the reflective tiger stripes and sewn from the outside with a kind of transparent film.
On the Toebox additional eyelets were attached to make double-lacing possible – I find them especially in the combination as I have photographed them very strong.
In addition to a total of 3 pairs of laces, the shoe comes with a carbine from Chemist Creations, on which “Chemist Creations” was printed in Chinese – as well as on the inside of the shoe and on the pulltabs at the heel.
All in all I think this shoe is really beautiful and well thought out! Beautiful Colorway, very comfortable to wear and a lot of attention to detail.
If you didn’t have this release on your screen, you’ve definitely missed something! 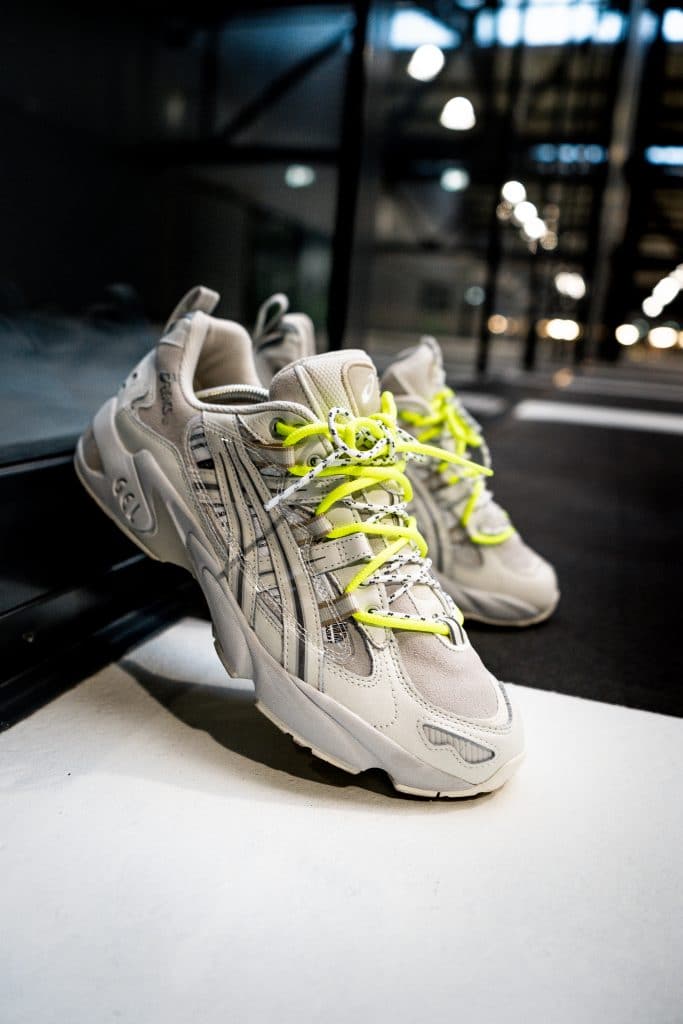 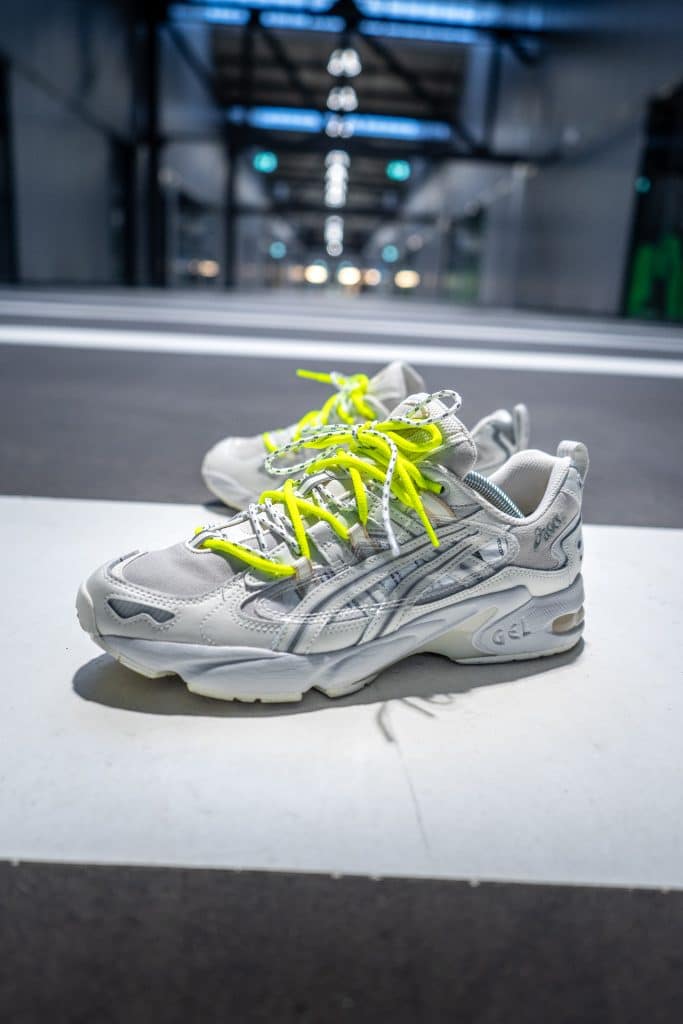