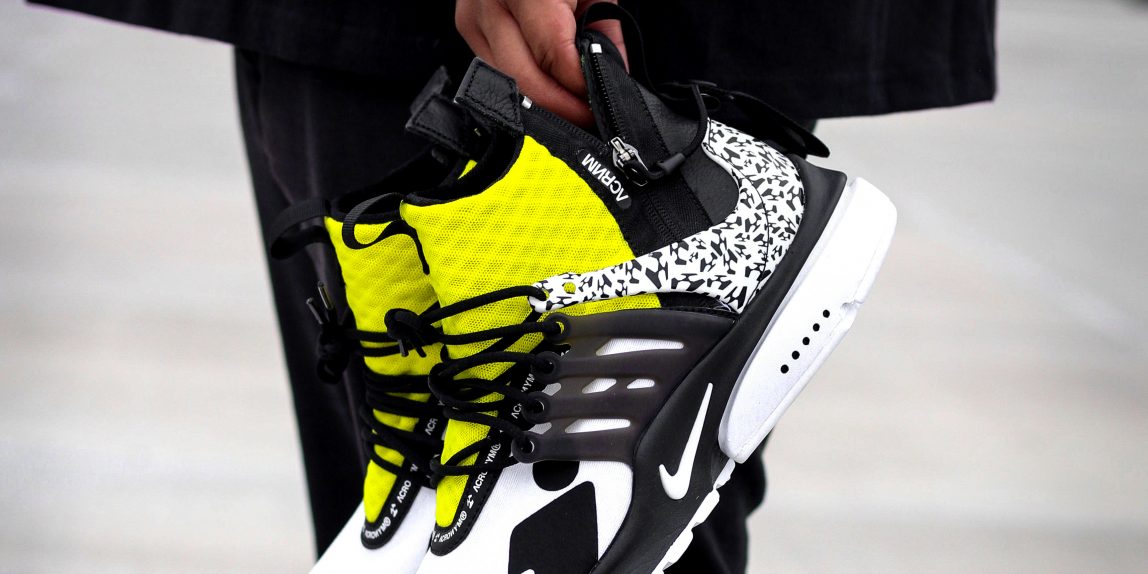 Acronym – behind the brand

The Acronym x Nike Air Presto Mid is one of my absolute favorites since last year! In order to understand the story behind the shoe that makes it so unique, I have to dig a little deeper – because the high-end label Acronym was not always a fashion label. Acronym was founded in 1994 by Errolson Hugh and Michaela Sachenbacher as a boutique design agency.
“But a design agency doesn’t produce clothes?” you probably think now.
I can understand the question, so let me tell you something about the history of Acronym.

The rise of Acronym

Errolson Hugh grew up in Canada with his brother as the child of an interior designer and an architect. His first sales experience was selling Chanel Bootleg T-shirts at high school.
At this high school he met the later CEO of Acronym Michaela Sachenbacher and followed her to Munich.
While Michaela Sachenbacher spent a year in Kyoto to learn Japanese, Errolson made his first breakthrough as a designer for the German brand Subwear, for which he designed a 30-piece collection. Through this breakthrough he found his way into the world of “Techwear”.
After Michaela’s return to Germany, they founded the agency “Acronym” in 1994 and designed snowboard clothing for brands like Burton, with whom they worked for 13 years.
The inspiration for Acronym’s first own commercial collection called “KIT-1” was karate. Errolson’s intention was the desire for everyday clothes in which one can move as one would in a karate suit (Gi). Errolson Hugh wanted you to be the best version of yourself in everyday clothes. Thus, performance and simplicity merge in Acronym’s garments.
The KIT-1 collection was released in 2002 in a quantity of 120 pieces.
Sounds like a lot, but it’s not, since the collection consisted of sets that included a jacket, messenger bag, soundtracks, image files, and more – all in one package.
This collection made the French store “Colette” aware of Acronym and presented the first collection in the Paris flagship store in Paris. Similar to Jun Takahashi and his brand “Undercover”, Colette also contributed to the success of Acronym.

„(…) our whole thing is, Acronym is really about agency. It’s about enabling somebody to do something they couldn’t otherwise. (…)”

Nike x Acronym – how it came into existence

In 2014, Nike CEO Mike Parker became aware of Acronym and the collaboration between Errolson Hugh and Nike began.
A year later the first collaboration between Nike and Acronym appeared on the sneaker store shelves: the Acronym x Nike Lunar Force 1.
In 2016, 2017 and 2018 the Nike Air Presto Mid followed in the first version, the Nike Air Force Downtown HI SP, another Lunar Force 1 in “Triple White”, the Nike Air Vapormax Moc 2 and finally the second version of the Nike Air Presto Mid, which we’ll talk about soon.
Meanwhile he designed the ACG line (All Conditions Gear) for NikeLab and the fashion line “Shadow Project” for the Italian brand Stone Island.

Bright yellow and the acronym logo countless times on Toecap and Heelcage: these are the features that make the Acronym x Nike Air Presto Mid stand out.
The successor or little brother of the 2016-released Nike Air Presto Mid is not as popular as its predecessor, but is definitely not inferior!
The “T-shirt for the foot”, as the Nike Air Presto was called back then, features a white mesh upper paired with black tapes and a black swoosh on the toebox. On the white Toecap and the white Heelcage there are countless small, black acronym logos.
The special thing about the shoe starts above the cage and the Toebox.
Errolson Hugh turned the otherwise low Nike Air Presto into a midtop that’s worth seeing! The sock-like entrance was dipped into a bright neon yellow, while typical acronym zippers – with adjacent acronym lettering – on both sides should make dressing easier. The zippers converge on a kind of loop so that they can be opened and closed at the same time. To prevent the loop from dragging around the floor, a button has been attached to the pull tab of the heel to attach the loop.
Despite the pulltab and heelcage, the hack is less wild, because the part is wrapped in plain black leather – the zipper attracts enough attention.
Inside, thanks to branded leather insoles and leather lining, you feel right at home and can immediately plunge into urban realms!
The comfort of the shoe is completed by Nikes Air sole in the heel area and the Duralon sole under the forefoot.
The 5 points in the heel area represent Nike’s “Alpha Project”, which was launched on New Year’s Day 1999. “Alpha” – 5 letters. 5 steps. 5 Steps Nike went through to develop, create, test and prove the products. Since the logo of the “Alpha Project” and the swoosh should be present on the shoes, nothing too big, conspicuous, but something minimalist but meaningful was allowed to appear. That was the birth of the 5 points, the logo of the “Nike Alpha Project”.

The 2018 Acronym x Nike Air Presto Mid is super underrated and stands, for whatever reason, in the shadow of its simpler predecessor from 2016.
I can understand why the logos on Toecap and Heelcage make it too “loud” for some people – but I can’ t see why the prices on StockX are far below the retail price of 200€ and the demand is so low. His predecessor still achieves prices beyond the 500€ and differs only by the missing logos and the other Colorways.
But I have to admit that it took me a long time to like the shoe – also because of the often mentioned printed parts. However, it is simply a shoe that looks better and better with every picture you see, apart from the really super well thought out details.
The Acronym x Nike Air Presto Mid is, like the Undercover x Nike Daybreak, a wearable piece of art.
All in all it’s a nice, well thought out shoe for me that was designed with a lot of attention to detail and which, if you like fancy shoes, should be included in every rotation.
So: Don’t sleep on ’em. At a price of 150€ you shouldn’t think long! 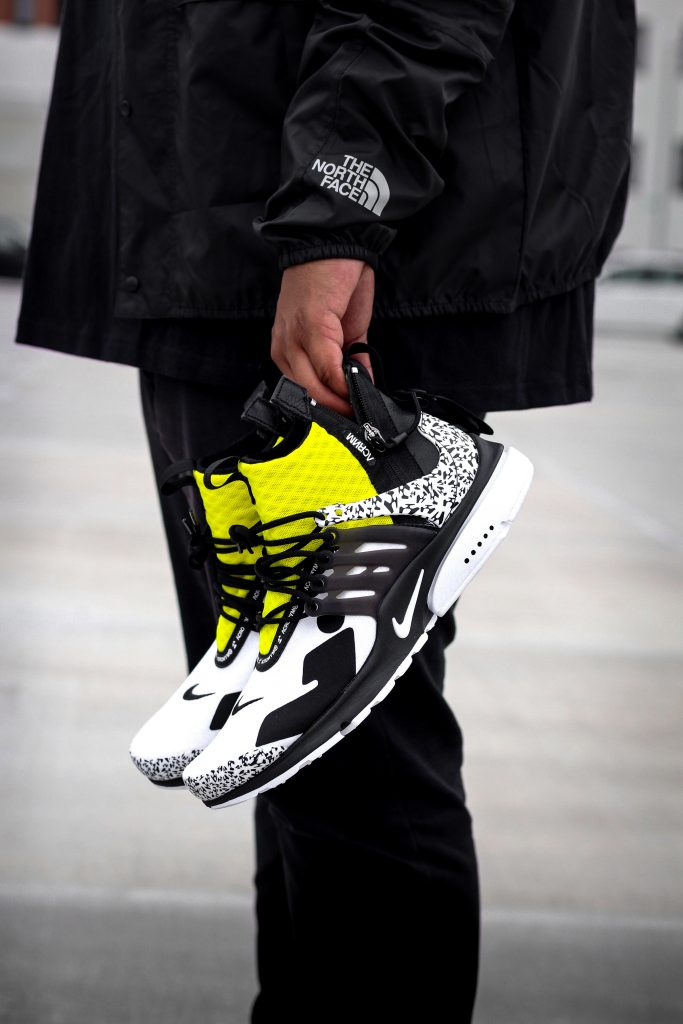 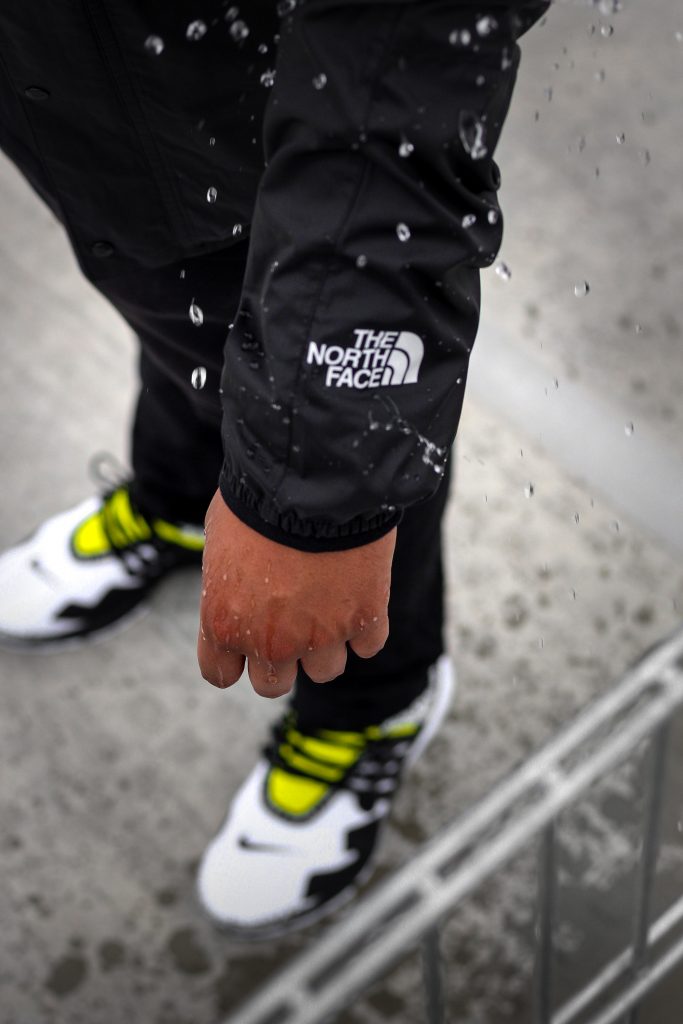