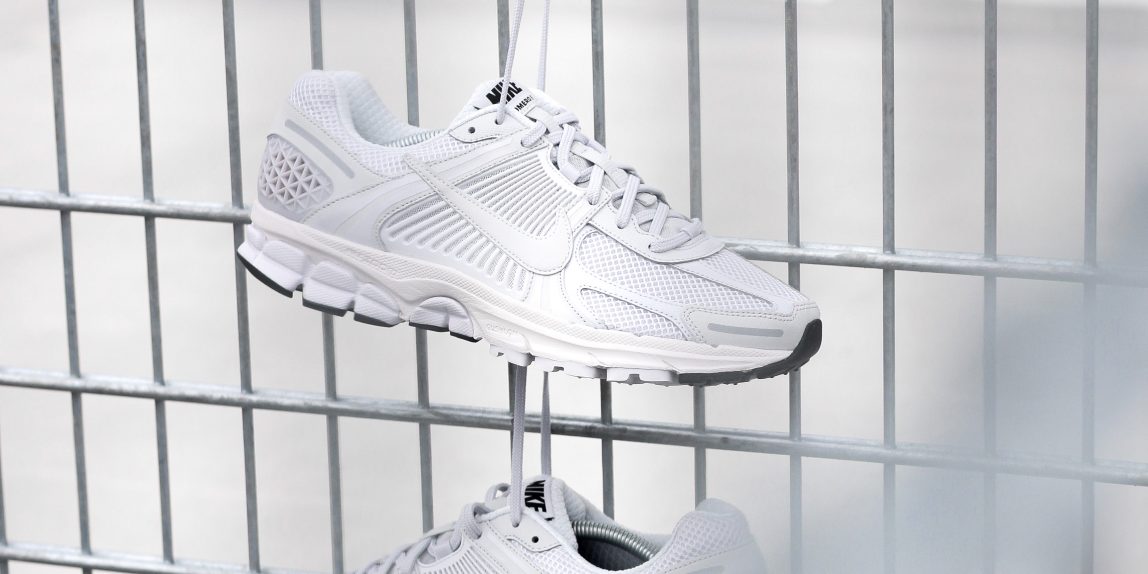 You love Nike, listen to “Nikes on my feet” by Mac Miller every day, want to know something about the Nike Vomero 5 SP, but can’t do anything with the name Bill Bowerman? Then you should definitely start reading this text now!
Blue Ribbon Sports and Nike co-founder Bill Bowerman was born in Portland, Oregon in 1911 and was an athlete at the University of Oregon – home of the Oregon Ducks – during his studies.
You don’t think you’ve heard of Blue Ribbon Sports? Wait and see.
During World War II Bowerman served the USA as a soldier and returned to Oregon after the war as a decorated hero.
Arriving in Portland, he was named High School Football and Track Coach in 1948. In his 24-year career, during which he was even track coach of the American Olympians in 1972, he won a total of 4 NCAA titles (National Collegiate Athletic Association) and introduced “jogging” in his hometown of Eugene.
In his career as a track coach, he met a young athlete named Phil Knight and became his mentor and coach as well as a close friend.

Besides, Bill Bowerman kept tinkering with running shoes. He experimented with metal and plastic spike panels and placed different uppers on different laths to create the perfect shoe for the tartan track.
The first to test one of Bowerman’s prototypes was the school athlete Phil Knight. His teammate Otis Davis tried out Knight’s shoes and liked them so much that he didn’t give them back to Knight. Davis won a conference championship in Bowerman’s shoe and a gold medal over a distance of 400 metres.
Bowerman customized the later models to fit the runner by drawing a line around the runner’s feet to take measurements and features – such as misalignments – into account during manufacture.

An injury to later Olympic marathon runner Kenny Moore eventually led to one of Bowerman’s most consistent innovations: Moore suffered a stress fracture in his foot because of wrong shoes – he wore pole vault shoes and no running shoes – and Bowerman took care of him.
After the injury was overcome, Moore covered over 1000 miles with Bowerman’s prototypes – and one of the most popular long distance running shoes was born. The magazine “Runners World” even described it as ” the most popular long distance running shoe” after its release in July 1973: It was the birth of the “Nike Cortez”.
In addition to the “Nike Cortez”, Bowerman also designed the “Waffle sole” by chance. This can be found on the Nike Daybreak and the Nike Waffle Trainer, who is celebrating his comeback this year.
And what does all this have to do with the Nike Zoom Vomero 5 SP? You’ll find out right away!

From the underdog to the goddess of victory

On 25.01.1964 Knight and Bowerman founded the sports specialist trade “Blue Ribbon Sports”, which initially concentrated on the import of Japanese sports shoes. To be precise, Blue Ribbon Sports imported running shoes of the Onitsuka brand, which is still well known today.
Bowerman believed that Japanese running shoes could perform at least as well as German shoes, which were the standard on the track at the time.
Onitsuka running shoes were sold from the boot until two years later – in 1966 – the Blue Ribbon Sports Shop opened its doors on Pico Boulevard in Santa Monica.
On 30.05.1971 the name changed – Blue Ribbon Sports becomes Nike Inc. and launches the first collection with the “Swoosh”.

Zoom: a running shoe for everyone

The Nike Zoom Vomero 5 SP was first launched in 2007 as a long distance running shoe. It was the first shoe to get the Zoom BRS1000 cushioning. Zoom is made of thousands of “Tencel” cellulose fibres that are under pressure in the Zoom unit. These fibers absorb the impact and give energy back when the foot is lifted. How? By giving way on impact and allowing the foot to sink into the cushion. When the foot rolls and lifts, on the other hand, they tension themselves again – like metal springs – and thus release energy that benefits the runner.
The Nike Zoom Vomero 5 SP is – as I like to call it – a real plastic bomber. But an underestimated one.
The upper consists mainly of mesh. In addition to the Engineered Mesh, a kind of artificial leather and plastic parts are used.
The ribbed cage, on which the Nike Swoosh was sewn, and the triangular ventilation unit at the heel are both striking.
Before the “normal” Vomero came out this year, the “A-Cold-Wall*” brand took on the runner and gave it a block of plastic above the ventilation unit, many of which were cut off to expose the distinctive heel area.
Above the heel and on the forefoot there are still small 3-M stripes. Looks good and makes sense when you consider that the shoe was originally designed for running.
The insole is also light grey and crowned with an orange print depicting Bowerman’s head and the words “Bowerman Series”.
The shoe is rounded off by the Zoom midsole in beige and white and the black outsole.

I chose the “Vast Grey” Colorway because the color is much more summer than “Charcoal” – a dark grey that is almost black. Besides, I’m not a big fan of shoes in “Triple Black” anyway.
The mix of mesh and plastic is also perfect for the summer – I think my foot has never been so well ventilated.
In addition, the cushioning mix is a dream and you immediately feel comfortable in the shoe. In my opinion it is neither necessary to wear it for a long time, nor do you have to get used to the shoe – slip in and go!
For me the Nike Zoom Vomero 5 SP is the most comfortable shoe in the retail price segment up to 160€!
The Nike Zoom Vomero 5 SP is currently available for 120€ on sale and in different sizes. 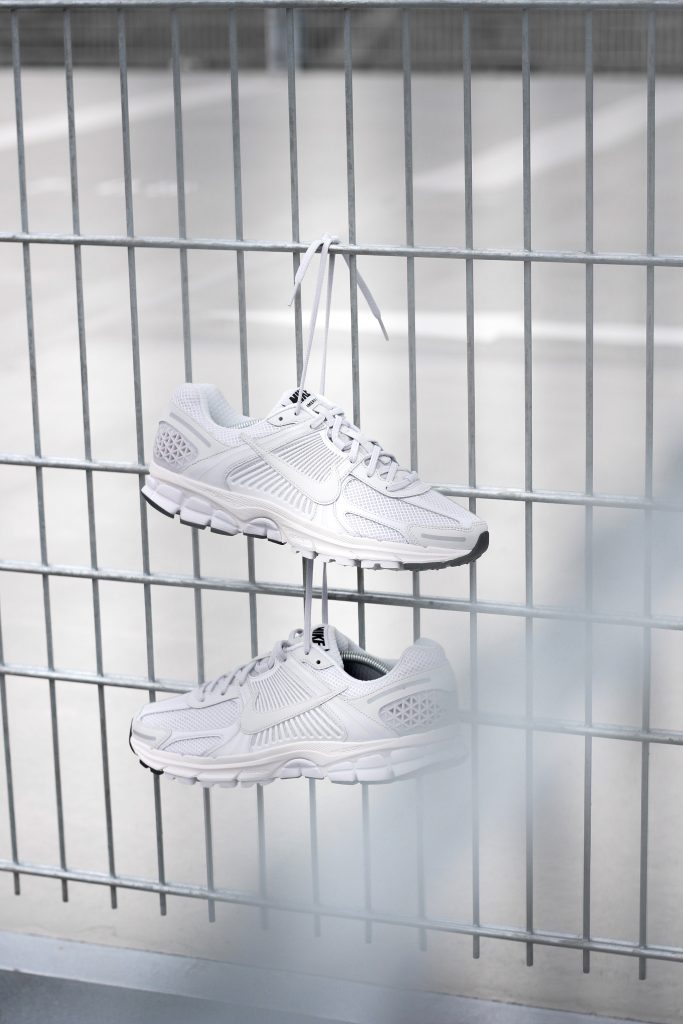 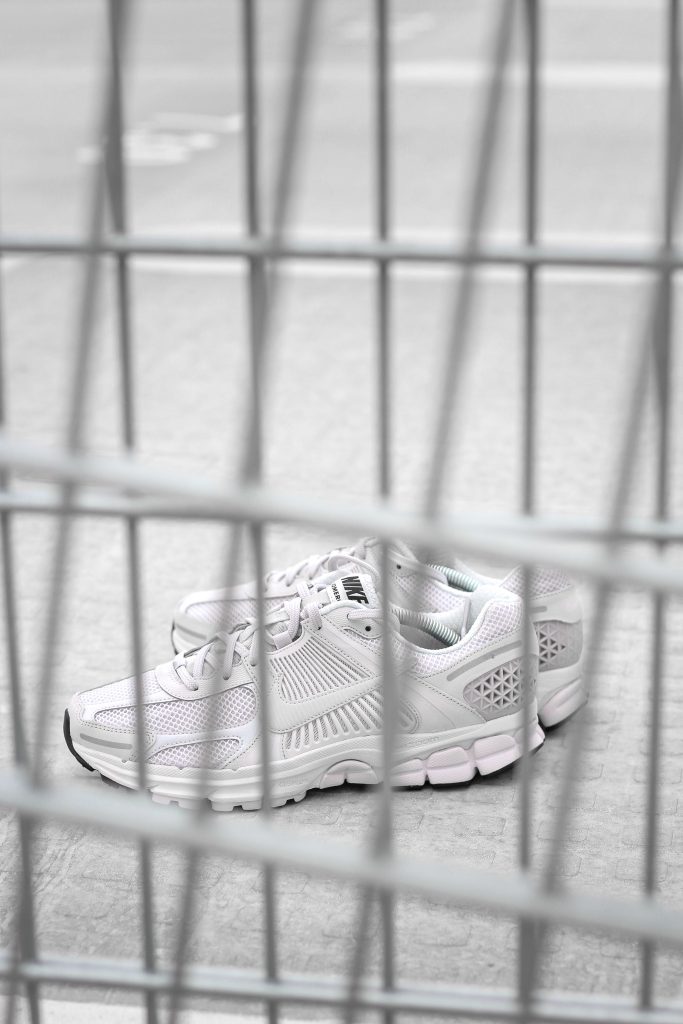