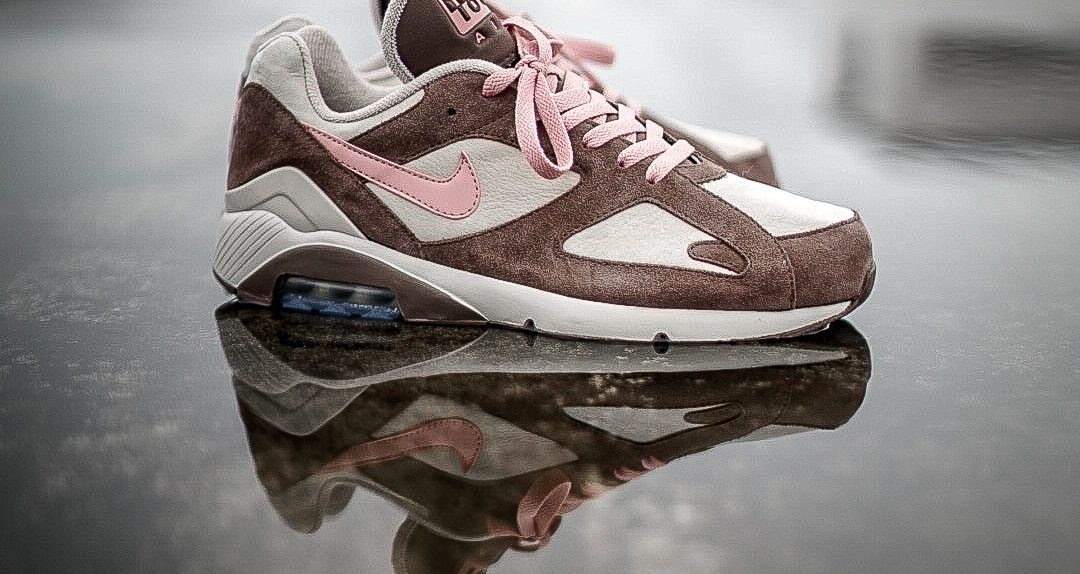 1991: The Wadden Sea seal conservation agreement comes into force, Ed Sheeran is born – and Nike launches the Nike Air Max 180.
But hardly anyone has the successor to the legendary Nike Air Max 90 on their screens.
Why? You’ll get an answer to that in the following lines.

The Nike Air Max 180 is the result of a collaboration between Tinker Hatfield and Bruce Kilgore – arguably the greatest designers Nike has ever had.
Tinker Hatfield should be at least familiar to everyone who’s interested in Nike.
Hatfield was the designer who made Nike’s Air Unit visible.
The first Nike running shoe with visible cushioning was the Nike Air Max 1, which he designed and which appeared on sports store shelves in 1987.
This was followed by the Nike Air Jordan 3 – the first performance basketball shoe with air cushioning – which also bears Tinker Hatfield’s signature.
But who is Bruce Kilgore?
Bruce Kilgore is the man who did the “groundwork.
From his pen comes the Nike Air Force 1, which has been on the road for over 30 years. The icon. The classic.
The timelessly beautiful Air Force 1 was the first basketball shoe with air cushioning and quickly became Nike’s bestseller. Even today it is still one of the best selling shoes in Nike’s inventory.
Now two of the greatest designers Nike had to offer came together to create a shoe. What can go wrong? Unfortunately quite a lot.
But let’s start all over again.

When the Nike Air Max 180 was launched in 1991, it was the Nike Air Max with the largest air bubble to date. It offered the wearer a 180 degree air bubble and 50 percent more air than any previous shoe with the iconic recess in the midsole.
To accommodate the air cushion in the shoe, the designers went all out and cut out even more of the midsole. At the same time, it was the first Nike whose air unit had direct contact with the ground and was not shielded from it by the midsole or outsole.
In order to give the new midsole more attention, it was framed – similar to the Air Max 90. With the OG Colorway in a gaudy Laser Red. In addition there were highlights in ultramarine and a white upper – 90s vibes.
Despite the fitting mood the shoe created and the innovative sole construction, it did not go down as well with buyers as the Nike Air Max 1 or the Nike Air Max 90.
That wasn’t even because of the new sole, but because of the upper, which many found too “Dad Like”.
Even the TV commercials couldn’t help much, although Nike went new ways and hired artists and creative minds instead of Weiden & Kennedy Art Directors – Nike’s agency of trust.
The marketing push during the 1992 Olympic Games was equally unsuccessful, although Michael Jordan was often seen in Nike’s new Air Max 180.
After the turn of the millennium – 2004 – Kanye West’s debut album “College Dropout” was released. In this context he got a Custom Air Max 180 from Nike. The Nike Air 180 “College Dropout”.
In 2005 Grime pioneer Dizzee Rascal got the opportunity to use an Air Max 180 as a canvas for his own Nike collection. The result was the Nike Air Max 180 “Dirtee Stank”.
In 2006, in collaboration with Eminem, the Air Max 180 “Shady45” was auctioned at a charity auction.
All these marketing moves failed and the Nike Air Max 180 still stood in the shadow of its successful predecessors.
Until early 2018 – who would have thought it – Rei Kawakubo came around the corner with a Commes des Garçons collaboration on the Air Max 180, putting it in the spotlight. So, like Acronym, it made the Nike Air Max 180 big.
The Commes des Garçons collaboration included a total of 3 Colorways: Black/Pink, White/Pink and Pink/Pink.
After the release of the shoes the Air Max got back on the radar of the people and Nike reacted promptly. One Air Max 180 after the other was on the shelves of the sneaker stores: from the OG Colorways to new and limited releases.
By the way, Nike also used a Commes des Garçons fashion show to introduce the Nike Air Vapormax to the world.

“[The Air Max 180 was] the first signs of more visible Air in Nike soles,” concludes Hammell. “It was a foreshadowing of what took 25 more years to perfect with the VaporMax: total Air cushioning throughout the entire shoe.”

I had the Nike Air Max 180 “Bacon” already longer in the view and on the list. But as it is nowadays, most general releases end up in sale anyway, which is why I honestly wasn’t willing to pay the retail price of 150€.
Fortunately I found what I was looking for at the Mesh & Laces – which by the way is always worth a visit and my highlight in the north every year – at the Sneakerschoc booth and took the shoe home for just 60€.
I have to say that I am enthusiastic about the quality of the shoe. The leather feels good and valuable and the terry cloth in the lining of the shoe nestles wonderfully to the foot.
I wasn’t aware before that the shoe had a sockliner – a sock-like entrance – but it’s a big plus because it makes the shoe even more comfortable.
Also included are two pairs of laces. A pair in pink and a pair in baroque brown – matching the colour of the shoe.
The upper is in baroque brown and beige. A pink swoosh and a pink “180 Air” branding on the tongue and a pink Nike logo on the heel are added.
All this is rounded off by a brown out- and a beige midsole.
In my opinion, the “Bacon” is the most harmonious Air Max 180 available at the moment, and it is enhanced by the pink laces!
The quality is more than good and the leather smoother than I thought. Also an extra pair of shoelaces is rare.
At the moment you can still find many sizes at small prices – 70 to 90€ in the sale of various shops, because hardly anyone has this beautiful shoe in mind, or just sleeps.
If I were you, I’d buy it as long as it’s still possible – you can usually send it back or cancel it if necessary. 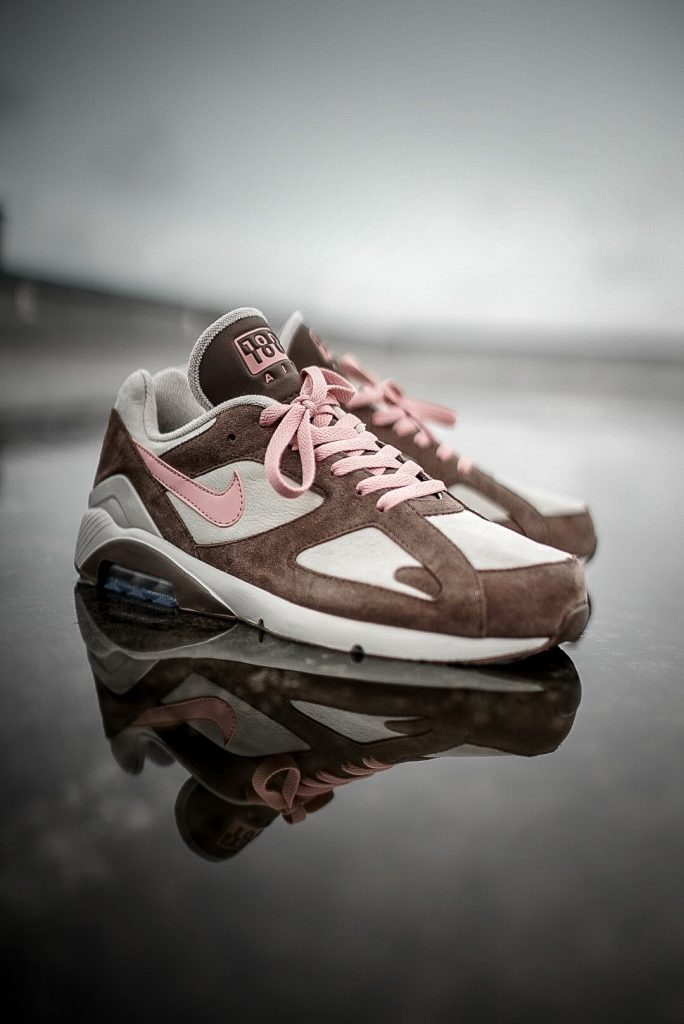 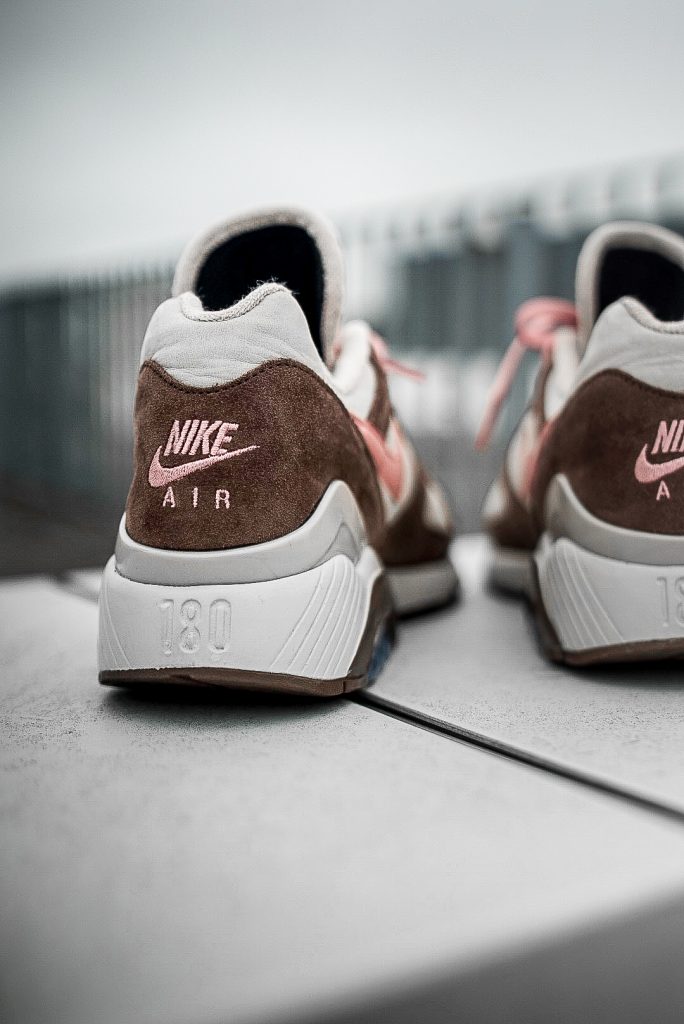